Swansea reading group to have say in The Man Booker Prize 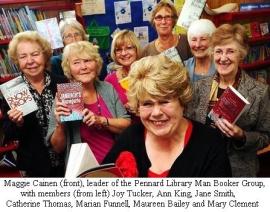 IT’S one of the most prestigious literature prizes open to writers, and a reading group from Swansea will help decide the winner.

The Man Booker Prize for Fiction, which was first awarded in 1969, promotes the finest in fiction writing by rewarding the writer of the very best book of the year.

And for only the second year, its judging panel has sought opinions about the books on its long and shortlist from members of reading groups across the UK.

Just six groups have been chosen to help, and although they have no part in the actual judging, the readers are asked to give their rating of the books, which are then passed to the judges.

One of the groups chosen for their help is the Pennard Library Reading Group, following a selection process in which groups across the country submitted applications to become involved.

Library manager Joanna Fee said: “It is quite a coup. The Man Booker panel asked for groups to explain why they would like to be involved.
“Our group, which has been going for about 10 years, explained their reasons and were lucky enough to be chosen.

“They are all avid readers, and they all read every book on the long list.”

The group, which has around 10 members, will later this month go up to London to meet the judges and some of the authors, ahead of the announcement of the prizewinner.

Ms Fee added: “It has been a great opportunity for them. They all use Pennard Library, and Swansea’s library service in general, very frequently.

“They read all sorts, not just fiction, including revisiting the classics, and have enjoyed being involved.”

The winner of the 2011 Man Booker Prize for Fiction will be announced on October 18 at a dinner at London’s Guildhall and will be broadcast on the BBC.

Last year’s winner, The Finkler Question by Howard Jacobson, has sold more than 250,000 copies in the UK alone.